The 9 Most Addictive TV Shows on Netflix

Home » The 9 Most Addictive TV Shows on Netflix
Previous Next

The 9 Most Addictive TV Shows on Netflix 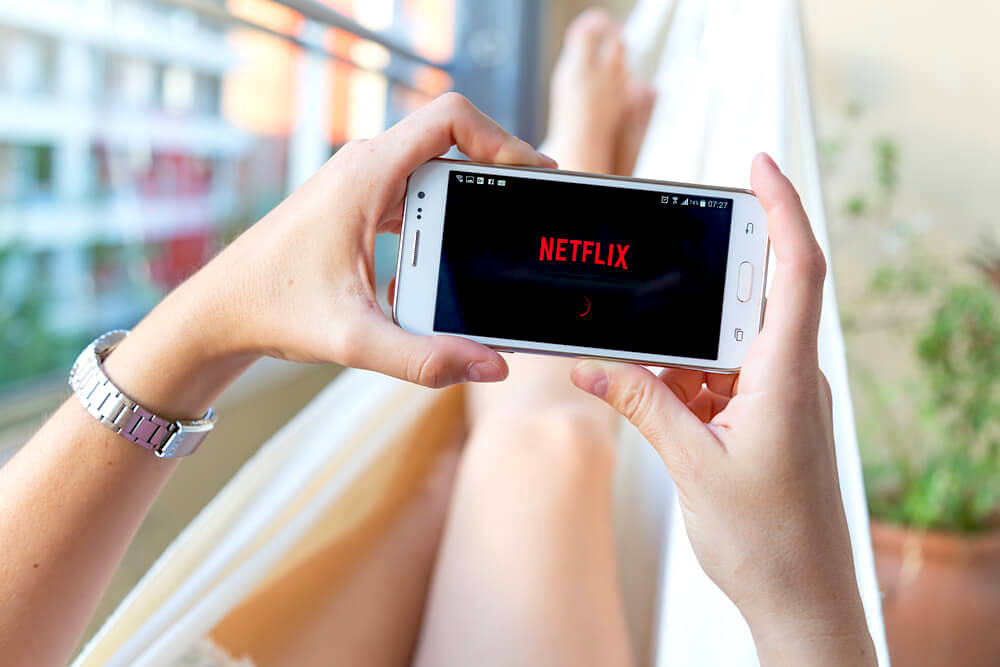 Young woman in a hammock opening Netflix in her smartphone | © Alex Ruhl / Shutterstock.com

It’s not your fault, you can’t control how your brains are going to react. Even Barack Obama admits that he can’t stop watching “House of Cards.”

“Stranger Things” has all the traditional elements of a science fiction horror movie. The familiar “creepy children in a rural setting” bring us back to days when science fiction seemed more well, fictional.

“Stranger Things,” is set in the fictional town of Hawkins, Indiana, sometime in the 1980’s. On the outside, the nearby Hawkins laboratory is the picture of progress, devoted strictly to scientific research and the promise of economic mobility for the sleepy town, but on the inside, something quite different is going on.

While fronting as a lab working for the US Department of Energy,  Hawkins is actually conducting paranormal and supernatural experiments on human subjects. Oh, and by the way, they’ve inadvertently created a portal to a world called “Upside Down.” That shouldn’t affect the residents too much, right?

The first season starts when Will Byers is abducted by a creature from Upside Down. While Will’s mom, Joyce, starts her own search for Will with the help of the town’s police chief, a young psychokinetic girl called Eleven, escaped from the laboratory and heads up a group of Will’s friends to do their own investigating. We’ll leave you to find out what happens in season 2. After all, after season 1, you’ll be too addicted not to.

Comedians in Cars Getting Coffee

By this time, we’ll watch Jerry Seinfeld doing anything, and if that’s getting coffee in cars with comedians, sign us up.

The premise for CCGC is pretty much standard for each episode. Jerry selects a car for a guest comedian, said comedian gets picked up and is driven to a local coffee shop. Episodes diverge when guest comedians like Michael Richards (Kramer on Seinfeld) show up to convince Jerry to take a side street or returns from a coffee clutch with Carl Reiner that ends up in a dinner with Mel Brooks, or the car simply decides to break down.

Outstanding episodes include Jerry’s talk with President Obama and his face to face with Howard Stern in a Pontiac 1969 GTO.

So, what is it about Comedians that makes it so addictive? Is it that Jerry Seinfeld just causes our dopamine levels to rise uncontrollably? Or is it just all that coffee they’re drinking? Tune in and find out.

Part of the movie Clockwork Orange’s success was the fact that it was stylish. Sure, Alex de Large was despicable and low, but no one could argue with the fact that he had style. He dressed stylishly, drank at the stylish “milk plus,” and even finished up his most brutal exploits with a rendition of “Singing in the Rain,” complete with a tap dance.

Peaky Blinders is equally stylish, and it would be no great extension to say that it resembles “Clockwork Orange” in many ways. Both revolve around British gangs, and both gangs have their own unique interpretations of justice.

The year is 1919, the place, Birmingham, England right after the first world war. Chief Inspector Major Chester Campbell has been sent on a mission by order of Winston Churchill, himself. His assignment: to clean the city the IRA, communists, and criminals; the Peaky Blinders gang are his first priority.

The plot of Peaky Blinders revolves around notions of class and empires, of knowing when to take power and when to limit it. That along with the Peaky Blinder dry wit make a fascinating and entertaining exploration into the criminal mind and what it means to be part of a family.

The End of the F**king World

We’ve all heard of sullen teens, but something about seventeen-year-old James tells us this is not just a passing phase.

James believes he is a psychopath, not a great self-image for a kid. In fact, he once burned his hand on a frying pan in order to feel something. He has been killing small animals in his spare time from the tender age of 8.

When he meets rebellious schoolmate Alyssa, he decides to expand on his hobby to include human subjects.  Alyssa becomes the next on James’ list of victims. He decides to feign romantic interest in her as a way of getting closer to her but soon finds that she’s nearly as messed up as he is. They decide to run away together, she with the intention of escaping her turbulent home life, he with the intention of killing her. A relationship develops. Apparently, love can be found in a hopeless place.

In the show “Breaking Bad,” everybody breaks bad.

For Walter White, struggling and depressed chemistry teacher, his cancer diagnosis is the last straw. Disgruntled and disillusioned, he turns to a life of methamphetamine manufacture to secure a financial future for his family. Student Jesse Pinkman is his right-hand man. Together the two begin cooking up a plan to cook up some of the finest meth on the market. And it works… a little too well.

The term breaking bad is a southern colloquialism used to mean “raising hell.” In “Breaking Bad” the term applies to everything and everyone. No one in this story remains innocent, no one in this story comes out undamaged. The bottom line: Nothing comes out good once you decide to break bad.

If you’re suffering “Breaking Bad” withdrawal, as most of us are, “Better Call Saul” may help to relieve some of the symptoms.

Let’s face it, nothing can follow “Breaking Bad,” and nothing should have to. “Better Call Saul” doesn’t. This Netflix original goes back to a time when Walter White was still teaching high school.

“Better Call Saul” revolves around Walter White’s lawyer, Saul Goodman, six years before Walter White decided to break bad. Back then, Saul was a small-time lawyer, Jimmy McGill. struggling to make his way in the legal world. When he gets hired by former beat cop, Mike Ehrmentraut, Mike gives him a glimpse into the illegal world of drug trafficking that convinces him that crime really does pay, and he goes to New Mexico to set up his practice.

So how does it compare to “Breaking Bad?” Most say pretty well. In fact, many critics have called it a worthy successor, and some have even deemed it superior to its predecessor, or should that be the other way around. Either way, the next time your suffering “Breaking Bad” withdrawal, “Better Call Saul.”

Thinking of a girl’s night in? Tune into the “Gilmore Girls” and you don’t even have to worry about how the house looks.

First, there’s Lorelei. You know the story, privileged girl, thinks there’s nothing in the world that mommy and daddy’s money won’t fix, goes and gets herself knocked up at the of 16 and moves away to start a life with her new daughter.

From there, she works her way up from maid to manager of a local hotel and goes on to raise her baby more as if they were two sisters than mother and daughter. The relationship between the two is very close, they live their lives like best friends. Lorelei is proud of the life she has built up independently of her parents.

Then, you’ve got the baby herself all grown up and ready for college.  Rory is not exactly a chip off the old block. Rory is the academic type and she’s just got herself admitted to Chilton Preparatory School, which would be fine if Lorelei could afford the tuition.

Hangdog, Lorelei runs back to her own Mom, Emily for help, only to find that no favor goes unpaid for. Emily agrees, but only on the condition that the girls join she and her husband every Friday night for dinner. The conflicting relationships between the two mother and daughter sets become a recurring theme on the show. While Lorelei runs away to save her daughter from her own fate, she finds that her daughter sort of likes the life her mom ran away from.

But that’s not to say the “Gilmore Girls” is all about analyzing family pathos, in fact, Gilmore Girls is loads of fun. We live vicariously through Loralei and Rory as they pursue their respective dreams; Rory’s to become an Ivy League journalist and Lorelei’s to open her own inn with her best friend. We also see the ladies struggle with romance and go through the ups and downs that we’re all too familiar with.

Jason Bateman is making it clear, it’s no more Mr. Nice Guy.  In “Ozark,” Bateman is on the wrong side of the law, and he’s more likely to end up arrested than having anything to do with his character “Arrested Development.”

In “Ozark,” Jason plays Marty Byrde, a self-employed financial advisor who launders money for a Mexican drug cartel with his partner Bruce.

Things go wrong when Bruce and the truck company owners he works with, decide to skim a cool $8 million off the top, which doesn’t sit too well with the drug lords. In fact, it sits so badly that they not only decide to kill Bruce, but also his fiancée Liz, and the owners of the trucking company. In order to not be the next one to float with the fishes, Marty needs to make amends.

Using an old promotional flier, Marty is able to cook up a spur of the moment story to convince the bad guys that the Ozarks are a prime location for money laundering and promises to move $500 million in 5 years if allowed to live. Now he’s got the next five years to prove it.

So, how is Bateman at playing it straight? According to critics, it is Bateman’s performance that carries the show, and with the public’s allegiance to Bateman, that may be all it needs. We’re all addicted to Bateman, and with him in the starring role, it may just be a familiar face.

Let’s talk about Dyl, for a minute. Dyl is one of those hopeless romantic types. He goes on a bunch of casual dates truly believing that each girl will be Ms. Right. This becomes evident as we watch Dylan get his heart broken over and over again in a series of flashbacks to past dates.

Flashforward and Dyl is living with his English friends Luke and Evie in a house in the West End of Glasgow, Scotland. Evie may have moved on from her previous crush on Dyl, but it still plays a major part in the show.

After being diagnosed with chlamydia, Dyl embarks on a mission to contact all the girls he loved before to inform them. The show is done mostly in flashbacks, in fact, it might have done be arguable that its original name, Scrotal Recall may have been a more appropriate title. In each episode, the reader sees another of Dylan’s dates, and more pieces of the puzzle are revealed. Don’t blame us if you get lovesick for “Lovesick.”

So, what’s your Netflix queue look like? Let us know what shows are becoming an addictive addition to your life.