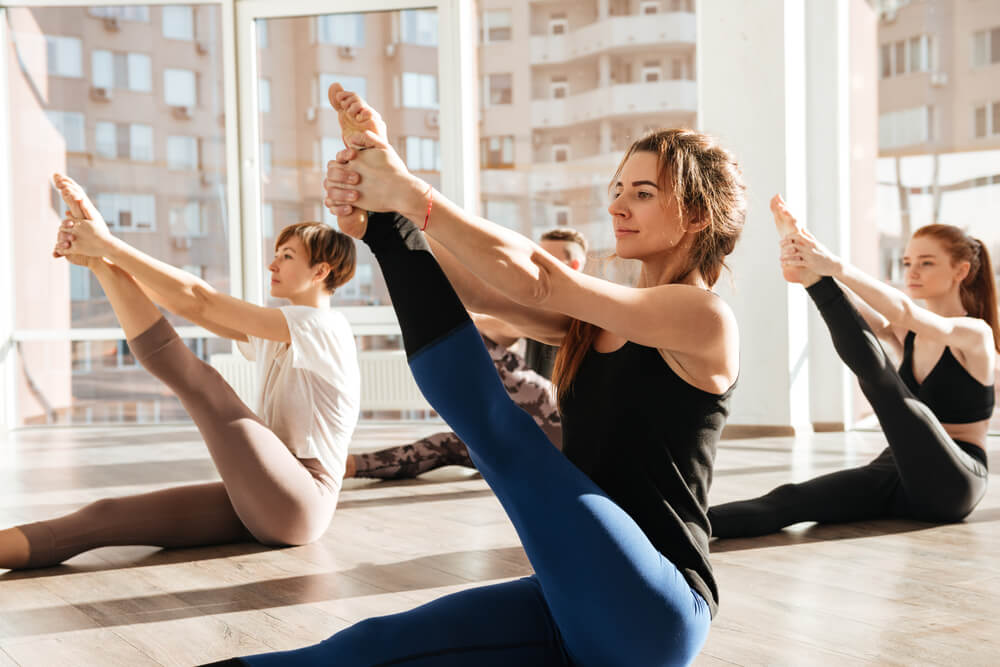 The ultimate goal of yoga is moksha or liberation. It’s a release for suffering and a road to inner peace and salvation. It is a combination of spiritual, meditative and physical practice and a healthy way to deal with modern ailments like anxiety and chronic fatigue. So why is it that so many of us seem to find it to be so much of a stretch?

Going to yoga class these days can mean a lot of things. For some it can mean performing hot yoga like it’s no sweat, for others, it can mean doing splits that threaten to cause irreparable damage. It may not be that yoga isn’t right for you, but rather that you just haven’t found the right type of yoga for you.

You don’t need to be deprived of your inner peace simply because you have trouble doing the downward dog. There are many types of yoga that are more about relaxation than exhaustion, and some that resemble aerobic exercise more than gymnastics. Here are a few of the types of yoga that might be your cup of tea. 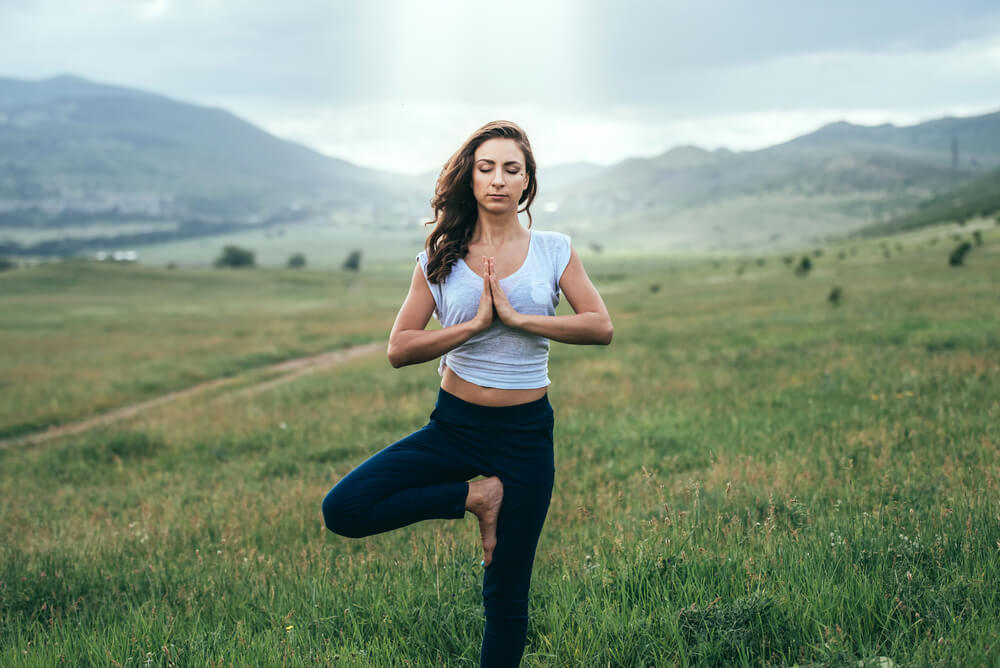 Don’t let the name scare you. Hatha may mean “forceful” in Sanskrit, but in actuality, it is the kindest gentlest form of yoga. According to Ellen Stansell, a scholar of yogic literature, the term may have come from the fact that hatha is forceful as compared to more meditative forms of yoga practiced when it was named.

Today, hatha yoga is most often used to refer to the static postures of yoga, as compared to the styles that require continuous movement.  A contemporary hatha yoga class focuses a lot on stretching and breathing exercises (pranayama) perhaps with seated meditation at the end. These classes are the classes that teach relaxation techniques and work on your alignment while gradually improving your flexibility and strength.

While hatha yoga is considered a ‘beginners’ yoga, it is not to be confused with easy yoga, as it is still very physically and mentally challenging. It’s good for those with a busy lifestyle who are looking to unwind and stretch and a mindful counterpart to a cardio workout. 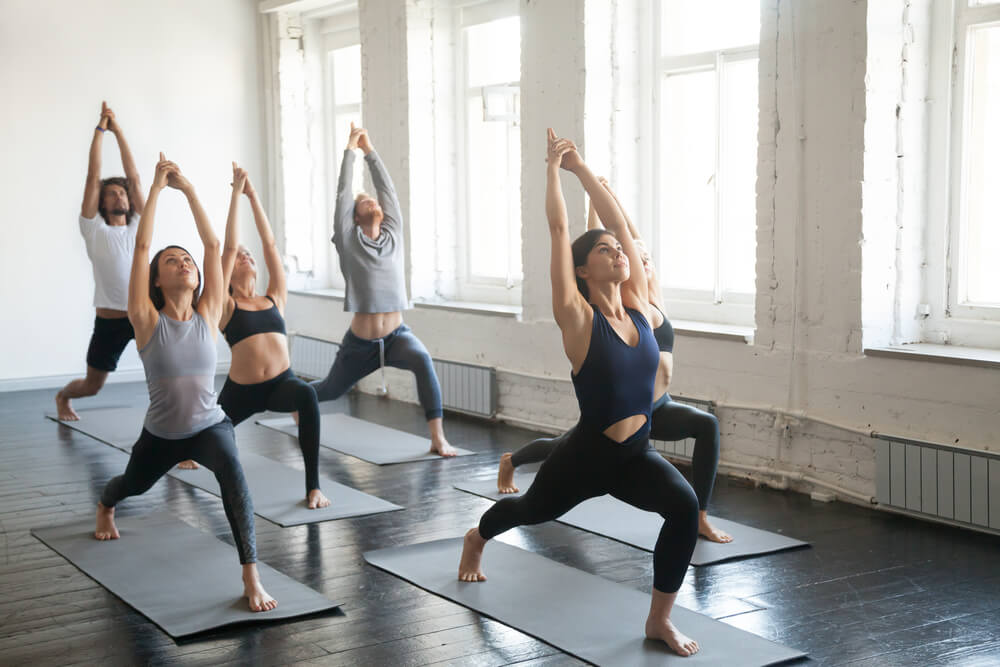 Vinyasa yoga is also known as flow yoga because of the way it connects the asanas or poses together fluidly. Whereas traditional hatha involves rests in between the poses,vinyasa strings them together to make a sequence, allowing for a smoother and more dance-like cardiovascular workout.

Also in Vinyasa yoga, movements are connected with breaths. The breaths act as anchors while the body goes from one movement to the next. The cat-cow stretch is a simple asana which involves arching the back on an inhale and rounding it on an exhale. The sun salutation is a more complexvinyasa in which each movement in the series is cued by exhalation or inhalation.

What to Expect From a Vinyasa Yoga Class

When you’re attending a visayana yoga class, expect to do a lot of sun salutations.  Also, expect to move quite a bit, and don’t be surprised to find some advanced poses in the routine. Some classes will be faster paced than others, and some will focus more on alignment,  depending on the teacher and the way that she was trained. While visayana yoga classes vary greatly, the one connection you can count on between all of them  is connection itself.  Every visayana class is focused on the flow between poses and the breaths that form the bridge between them. 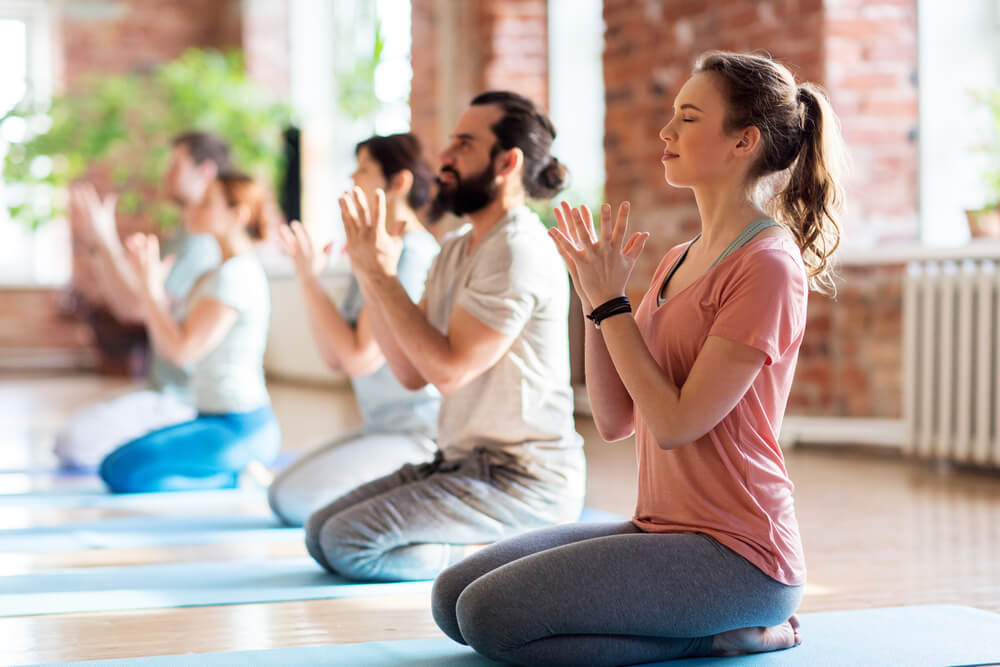 If you’re looking for superspiritual yoga, or simply the type of yoga with the greatest potential for a celebrity sighting, you can check both boxes off with kundalini yoga.

Get ready to do some chanting at a kundalini yoga class. The mantra Sat Nam (Truth Is My Identity) has been reported to have been heard echoing through many of them. Kundalini is also known for its dynamic breathing techniques and its goal of increasing physical vitality and awareness.

Kundalini yoga first arrived in California in the arms, legs, and spine of Yogi Bhajan when he brought his 3HO (Happy Healthy Holy (Hippie?) Organization there in 1968. Kundalini refers to the untapped energy (prana) at the base of the spine that, when drawn up through the body awakens the seven chakras. When the energy reaches the crown chakra, at the top of the head, full enlightenment occurs. Kundalini is often represented by the image of a snake coiled at the bottom of the spine.

Kriyas are the asana sequences done in kundalini. Kriyas are a series of poses accompanied by a breathing technique to intensify each pose. Every kriya is associated with a specific chakra. They may consist of rapid repetitive movements accompanied by a breathing sequence or by the recitation of a mantra. Others involve poses held for several minutes with a prayanama ( breathing exercise) or a mantra (chant).

In personalized kundalini sessions, a numerical analysis and diagnosis are made of which chakras are blocked. Then specific kriyas are assigned to best target the blocked chakras to restore balance. In a class setting, a teacher will pick the set of kriyas he or she believes to be the most beneficial to the greatest number of people.

What To Expect From a Kundalini Class

A Kundalini class usually consists of a short chant followed by a spine stretching warm-up class followed by kriyas. The class ends with a group meditation which may or may not be accompanied by a large gong being struck by the teacher and a closing song.

As for a dress code, many kundalini students prefer to wear white head wraps and clothing, however, it is optional. Others use sheepskin mats instead of regular yoga maps in accordance with Yoga Bhajan’s belief that this was a way to separate the body from the earth’s magnetic pull, although these days, the practice has been largely abandoned due to ethical beliefs.

Keep in mind, while kundalini yoga is the most spiritual, it is also the most intense. Its emphasis on opening the chakras goes beyond asanas. It appeals to people looking to stay grounded in their bodies while using yoga to reach enlightenment. 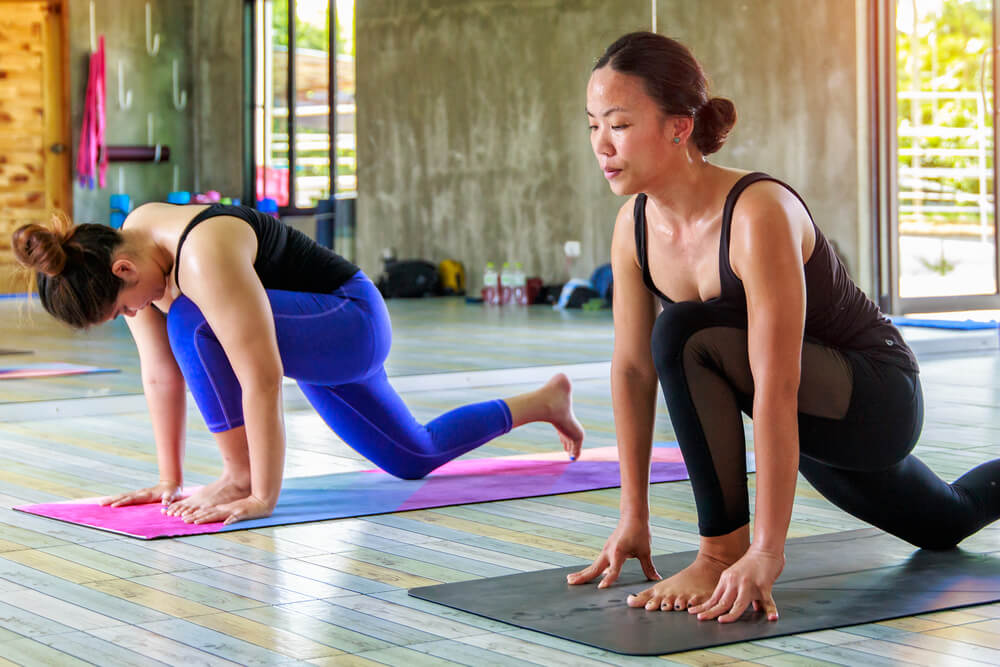 If you want to know why anyone in their right mind would practice yoga vigorously in a room heated to near ninety-degree temperature, there are quite a few logical answers. One is that hot yoga practice aims to replicate the weather conditions of India, from where yoga first came. Another is that it focuses on holding poses for longer periods of time; muscles stretch more easily in warm conditions. Yin, for example, is one of the slower paced yoga practices in which poses can be held one to five minutes or longer.

The Benefits of Hot Yoga

One of the reasons hot yoga is so “hot’ these days is because of its detoxification benefits. Heavy sweating helps to flush toxins from the skin. According to Joanna Thurlow, owner of Moksha Yoga Halifax, ” The heat allows you to go into different postures more safely and deeply. Isabel Lambert of Tula Yoga Spa in Toronto says, “It’s really for people who want a more intense workout, and for those who want to develop strength,  flexibility, and tone along with a cardiovascular workout.” She adds that working in the heat helps the body relax, improves breathing and focuses the mind.

And  If you’re more worried about what all this turning up the thermostat means to our environment than its exercise benefits, there are yoga studios for those with green principles. Moksha Studios are one of the first to incorporate energy efficient heating and sustainable flooring bringing an environmental component to their classes.

What You Should Know About Hot Yoga

So a bunch of hot sweaty people moving vigorously in a room heated to about 100 degrees – what can go wrong with this? Smell notwithstanding, as long as you take a few precautions to when practicing hot yoga, and pack some heavy duty deodorant, it should be relatively innocuous.

Drink a lot of water before hot yoga, and know when to stop. Halifax neurotrophic doctor Sandra Murphy warns, “You could be going beyond your endpoint because (with the heat) you’re losing the ability to know where your edge is, so you’re artificially stretching the muscle.” She also points out that while yoga was practiced in India, it was not practiced during the hottest parts of the day.” You may want to consider regular yoga as a more forgiving alternative. 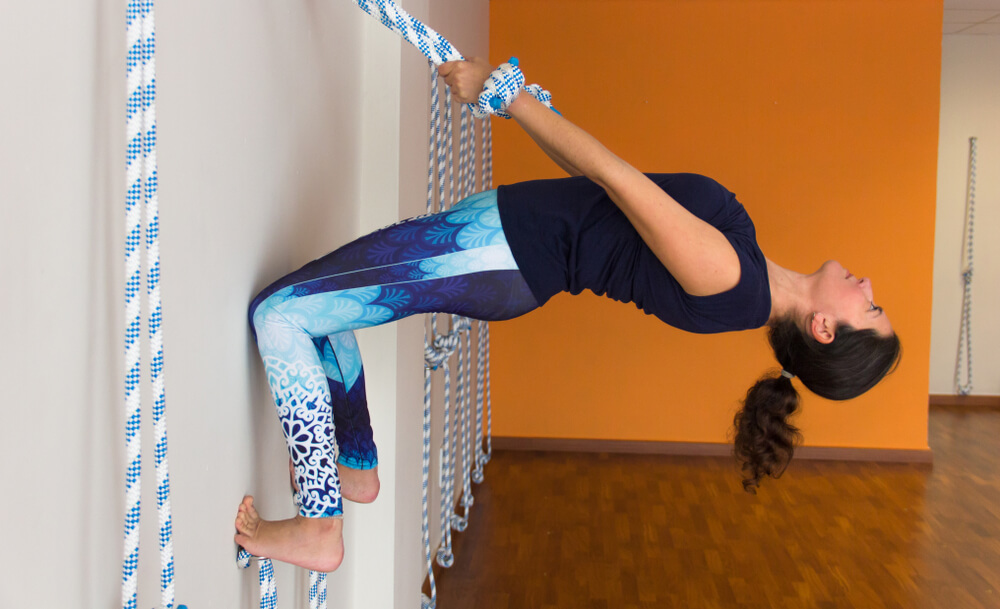 Do you dream of perfect bodily alignment? Do you believe that with every vertebra that pops into place, you will become more in balance with the universe? Do you twist and turn your body into awkward positions in an effort to achieve mental and physical liberation?  If so, you may be interested to know that there may be a better (yogic) way to do it.

BKS Iyengar was born in 1918. He started practicing yoga when he was a teenager in an effort to improve his health after a bout with tuberculosis almost took his life, and began teaching it in 1936. Iyengar’s method is based on giving primacy to the physical alignment of the body through yoga poses.  The idea is that once the balance is reflected in the body, it will soon be reflected in the mind.

One of  Iyengar’s innovations is the use of props. It’s not uncommon to walk into yoga these days to find blankets, pillows, blocks, straps, and bolsters, all Iyengar’s doing. The props are designed so students have the best alignment possible while their bodies open up.

Say, for example, you find yourself in a triangle pose. Your hand is on the floor outside your front foot, and you need to bring your hand up while still keeping your chest open. How can you do it?

To Iyengar, the answer is the block. In his view, the alignment of the left shoulder over the right can only be achieved by using a block under the right hand. This block can be removed when it is no longer necessary. One of the reasons Iyengar yoga is accessible to many people is because the props make it easier for the body to achieve correct alignment, making it more adaptable to the needs of the individual student.

Go with the No Flow

Although it can be strenuous, Iyengar yoga is excellent for building strength and increasing flexibility. It is also a good option for those who are not able to perform a flowing style of yoga. The absence of flow is part of what makes Iyengar yoga it is one of the more popular methods of yoga in the world.