Home » The 10 Most Popular Fitness Wearables
Previous Next 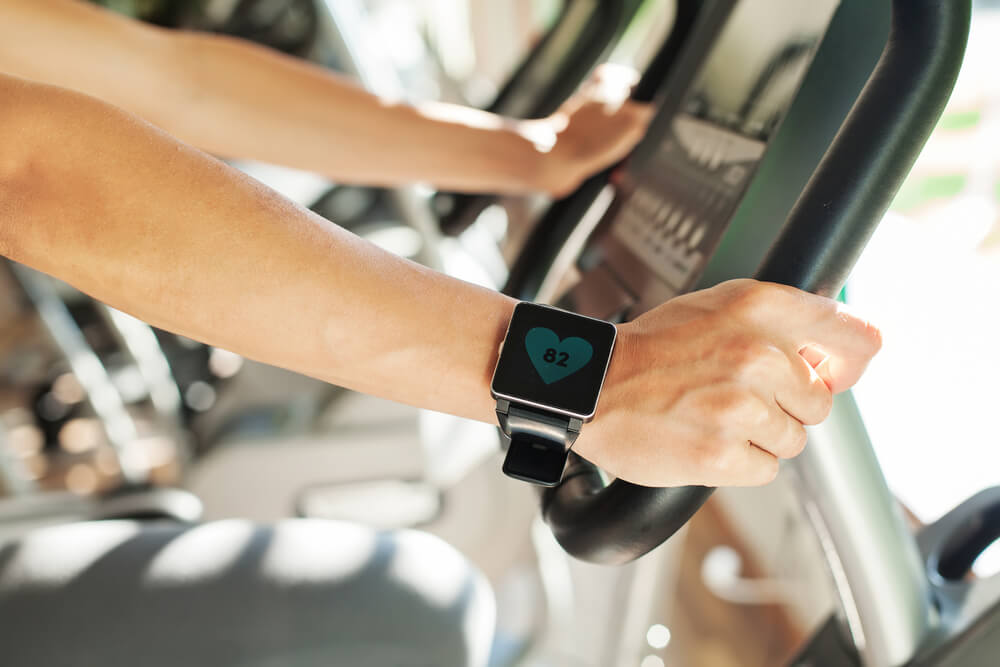 Want to get fit?

Nearly everyone wants a fitter and healthier body. However, becoming fit is easier said than done.

Make your workouts more effective by using fitness wearables. You should include them in your list of fitness essentials the next time you hit the gym.

They track various metrics, like steps and heart rate, throughout your exercise routines. Some even monitor your body at rest to check your baseline fitness. All of these pieces of information can help you get a clear idea of how you can improve.

In this article, you’ll see some of the most popular wearables right now. Feast your eyes on these fitness gadgets: 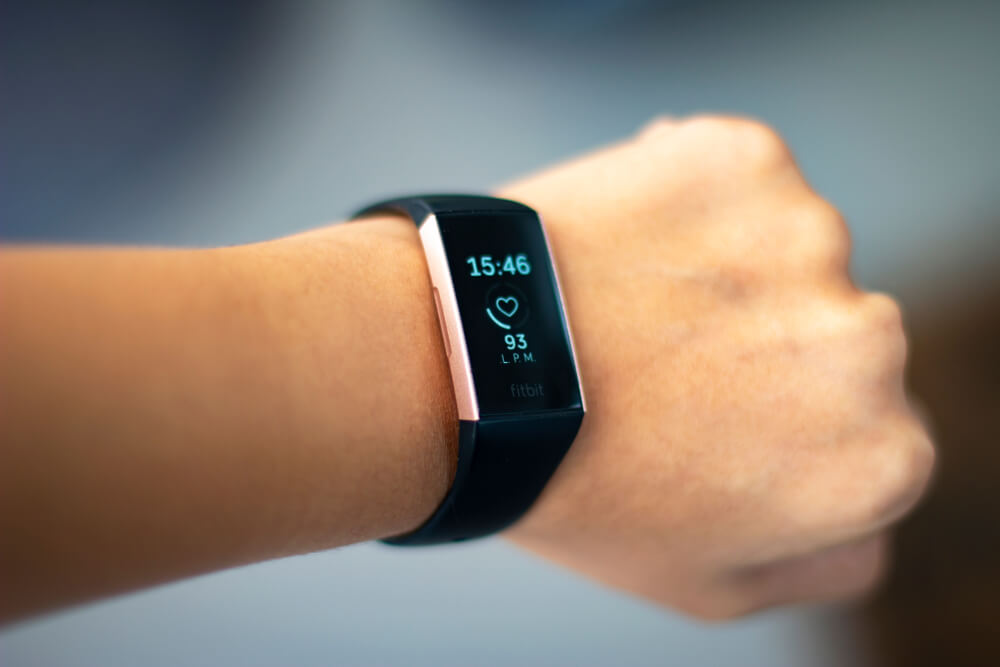 You don’t expect anything less from the company that made fitness wearables famous, and Fitbit knows it. The Fitbit Charge 3 is one of its latest offerings, and its goal is to make you commit to the Fitbit digital ecosystem even amidst intense competition.

Its most noticeable feature is its large, rectangular display. Its clarity is second to none, although it can only display grayscale.

Its battery life is surprisingly long, with tests lasting for six days. However, its range of sensors is what differentiates the Fitbit Charge 3 from its competitors. The wearable has top-of-the-line heart rate and SpO2 sensors, allowing it to collect reliable data from a wide range of physical activities.

Keep in mind though that this Fitbit device has no GPS chip. You’ll need to pair it with your smartphone if you want to add location data to your workouts.

Being a Fitbit device, it also comes with the Fitbit app, which includes its legendary sleep tracking measures. The price is a bit expensive, but that’s what you pay for excellence.

The Amazfit Bip has an impressive array of features, including a very accurate heart rate tracker. It has a built-in GPS chip, allowing it to measure distances and elevations more accurately. The device can also monitor a vast number of exercises with its multi-sport tracking. It even boosts max VO2 measurements, which is useful for CrossFit and HIIT enthusiasts.

Despite the variety of features, expect the device to last for up to a month on a full charge. The Amazfit Bip proves that performance and energy efficiency can go hand-in-hand.

If you don’t mind the finicky interface and its watch-like design, then there’s nothing else to dislike about the Amazfit Bip. 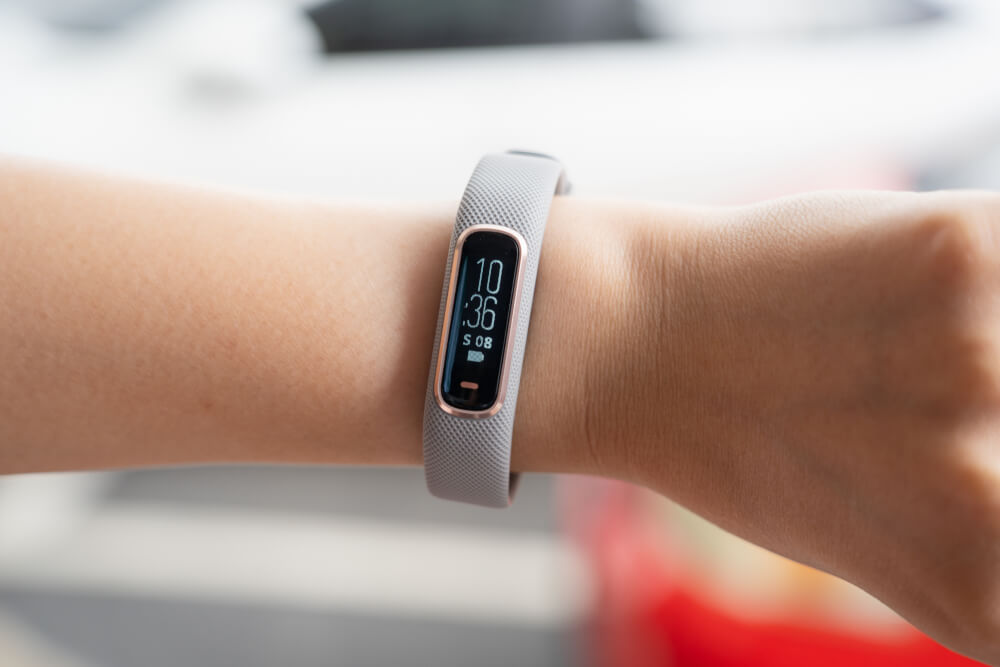 With the Garmin Vivosmart 4, Garmin has a device that can stand up even to the latest digital offerings of Fitbit and other competitors. While the Garmin line is known for catering to serious athletes, this wearable suits amateur fitness enthusiasts who like to try a different exercise.

With a battery life of nearly a week, you’ll be able to use this tracker for almost any type of activity, including long mountain treks.

This wearable has proprietary software that can give you insights into your physical performance. For instance, weightlifters would find the Move IQ feature to be useful. The Garmin Vivosmart 4 even helps you while you sleep; its pulse oximeter sensor can detect sleep apnea episodes.

If you like high-intensity activities, you’ll also love the ability of the Garmin Vivosmart 4 to calculate max VO2.

Again, there is no GPS support. Nevertheless, the accelerometer calibration ensures that run distances are recorded accurately.

The Fitbit Inspire HR packs the same Fitbit expertise in a smaller package. Despite being a cheaper alternative to the Fitbit Charge 3, you won’t see much of a difference in terms of performance.

Visually, it has a smaller display and a lighter design, although the thick bezels might be off-putting for some people.

With a respectable battery life of five days, this Fitbit tracker should be able to catch up with your outdoor activities.

As its name implies, its specialty is in heart rate monitoring. However, the wearable does more than just measure your pulse. It uses your heart data to see how your body is responding to the exercise. You’ll see what your current progress is relative to your fitness goals. Wear it around the clock to let it measure your resting heart rate, which is an indicator of fitness.

The Fitbit Inspire HR also offers other basic functionalities, including step measurement and automatic workout tracking. While being limited by its small range of features, it does what it can with excellence.

Characteristic of most Fitbit devices, the Fitbit Inspire HR gives superb sleep monitoring and analysis. It allows you to view how long you spend in each of the sleep stages, and it summarizes your last sleep quality in a nifty Sleep Score measurement. 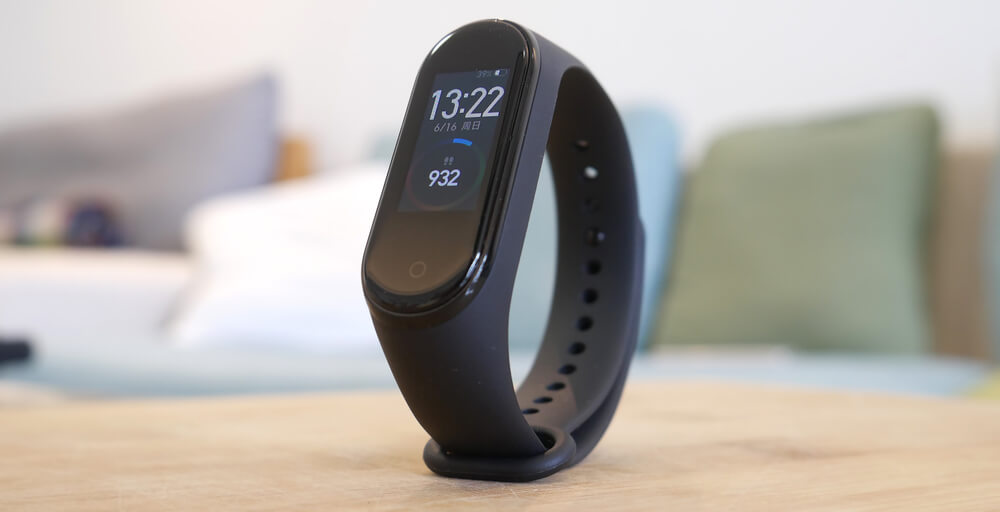 It has a slim design, although the display is significantly bigger than its predecessor. There’s an AMOLED display, giving you a clearer picture of what’s on the screen. The touchscreen is in color, which is already something that many trackers can’t provide.

The tracker can measure the basics, like your heart rate and your steps. When connected to a GPS-enabled phone, it can also track running and cycling activities. There aren’t a lot of other sensors, but perhaps that’s the reason for the most significant perk that this tracker can offer.

What’s most impressive about the Xiaomi Mi Band 4 is its battery life of 20 days, enough to deplete most fitness trackers twice. With its energy-efficiency, you can rely on this wearable to be with you wherever you go.

Remember the wise old saying in the fitness community:

Smartwatches and fitness trackers are different.

Many of the standard features of Fitbit fitness wearables are also in this device. Again, the wearable has no GPS chip, which means that you’ll have to bring your smartphone if you want to track running or cycling activities accurately.

Its signature heart rate monitor is called PurePulse. It automatically detects workouts and continuously measures your pulse. It also takes measurements at different parts of the day to help you determine your overall heart health.

Unlike top-of-the-line Fitbit products, you won’t see on-screen workouts in this device. However, the device can still track many predetermined exercises stored in its memory.

Its other features include guided breathing prompts, sleep monitoring, and female health tracking. 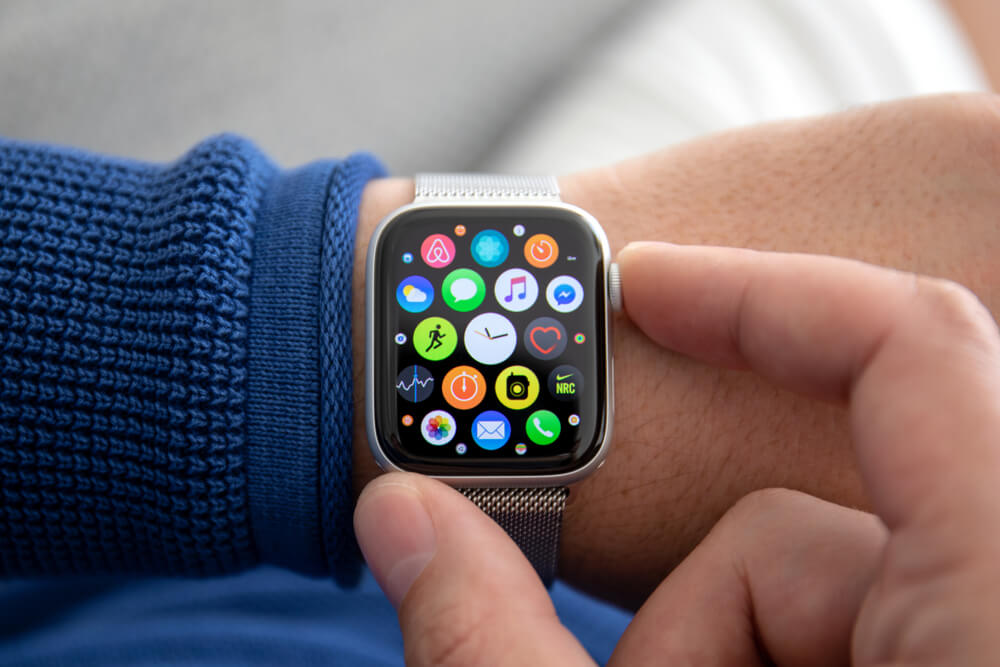 Now just because something is a smartwatch doesn’t mean that it can’t outperform a dedicated fitness tracker. It all comes down to the features that the device can offer, as well as how it implements them. The Apple Watch Series 5 is a good example, as it can provide you with something you’ll be hard-pressed to find elsewhere: an electrocardiogram function.

Remember those squiggly lines displayed on a monitor whenever a patient has heart trouble? An electrocardiogram measures and plots the electrical signals given off by your heart. Your doctor can then use the information to determine if you have any rhythm abnormalities, which are called heart arrhythmias.

The Apple Watch Series 5 distinguishes itself by being able to measure these same signals, allowing you to monitor your heart health in ways that other heart rate trackers can’t. This functionality is even FDA-approved. Your cardiologist would be impressed.

The Apple Watch Series 5 can do a lot with the data it collects, seeing that the new WatchOS 6 brings in more useful apps for your device. Its powerful processor ensures smooth performance without compromises in battery life.

From the same distinguished line of Garmin products, the Garmin Forerunner 645 is the runner’s best friend. It’s a GPS watch, which means that the device will use GPS data along with accelerometer measurements to measure your runs with precision.

However, the Garmin Forerunner 645 gives you more than just step counts. It can measure your stride length and other running metrics. It also generates recommendations on when and how long you need to rest and recover based on the run data it collects. This device even estimates how much time you’ll need to finish various runs, including marathons.

The device itself is small and light, so you would barely feel the equipment as you’re working hard. The bright display is readable even in full sunlight, making the device a breeze to use. It’s waterproofing also ensures protection even from the sweatiest of runners. 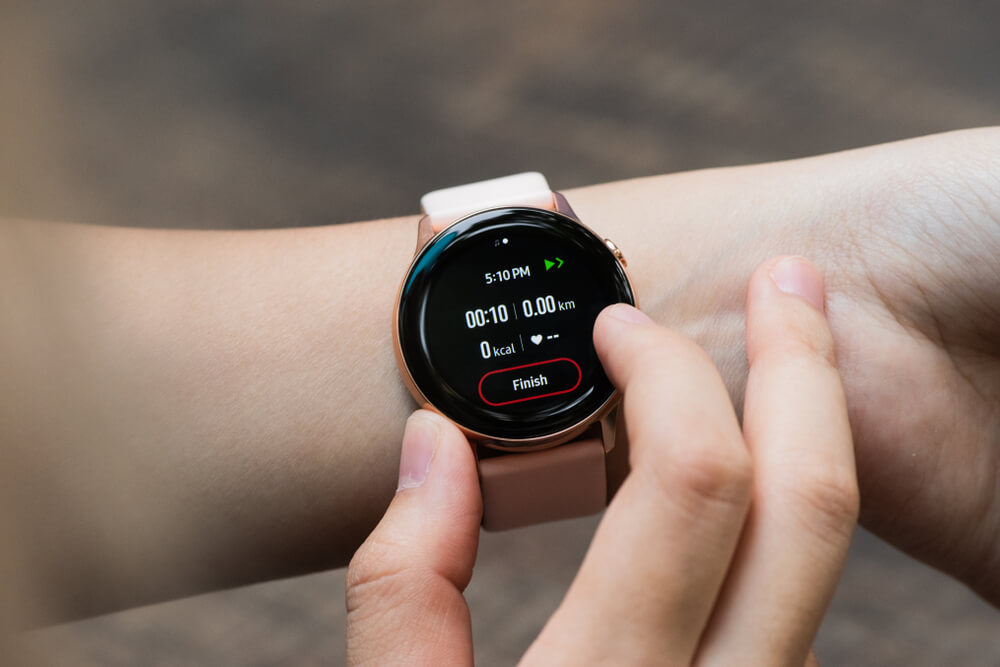 In the same group as the Apple Watch Series 5, the Samsung Galaxy Watch Active is best if you want a fitness wearable that meshes well with the rest of your devices. Note that the Samsung Galaxy Watch Active is primarily a smartwatch. If you don’t wish to dish out too much money on a stand-alone fitness wearable, then getting a fitness-enabled smartwatch is a smart move.

The Samsung Galaxy Watch Active is easily half the price of the Apple Watch Series 5. Despite its lack of an electrocardiogram feature, it still packs a punch when it comes to fitness tracking. For instance, it’s completely resistant to both dust and water. It’s also lightweight enough so that you can bring it almost anywhere.

The Samsung Galaxy Watch Active has continuous heart tracking, decent accelerometer sensors, and built-in GPS tech. The UI is also impressive, especially if you love how the Samsung interface looks.

An exclusive to the Samsung Galaxy Watch Active is the Power Share feature. You can use specific Samsung Galaxy phones to charge your watch wirelessly. No need to bring clunky chargers when you go on your next trip.

With a wide array of apps in the Samsung app store, you’ll never run out of software to use during your workouts.

The Suunto brand is well-known for its foray of extreme fitness devices. That makes sense, given that Suunto mainly craters to the intense crowd: ultramarathon participants, mountain climbers, and other backpackers. As expected, the Suunto 9 Baro can provide decent fitness tracking features even in the most extreme environments.

True to its name, the Suunto 9 Baro has barometric sensing, which means that it uses actual air pressure around the watch to determine the current altitude.

Some people like the Suunto app, while others don’t. For many, it’s not a dealbreaker.

The Suunto 9 Baro can utilize its fitness sensors continuously for up to 120 hours. That’s enough for nearly any type of endurance event, whether it be completing Ironmans or spelunking into caves.

The Suunto 9 Baro accomplishes this through the Fused Track algorithm, which uses motion sensors to reduce the need for GPS communications. A warning feature that automatically switches between battery modes is a nice touch.

Through this guide, you now have a better idea of which fitness trackers suit your active lifestyle. Complete your fitness gear by checking out these top brands for fitness wear.

Good luck, and welcome to the fitness world!